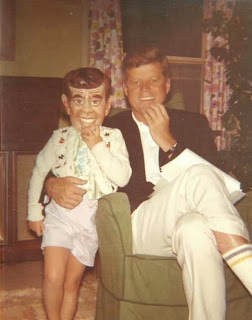 Watching all this JFK assassination anniversary coverage, it struck me how hard the corporate media simulacra factory works to convince us that we didn't really see what we saw in whatever footage of whatever event they are showing us... usually while the mind-altering, syrupy triumpho-serious music plays in the background to further enhance the illusion of credibility. For fifty years, and with ever-more bombastic and maudlin background music, they have been saying the ball you saw with your own eyes go over the left field fence indeed went over the right field fence... and you know that isn't what happened. We need Occam's Razor to touch up our mustache.

So you strip all of it away -- every bit of commentary on both sides of the "conspiracy-or-lone-nut" equation that's been whacked around like a warped badminton shuttlecock for a half century -- and you WATCH THE GAME ON THE FIELD. When dude's head snaps back and blows up like an 8mm Wes Craven film, everyone (almost everyone) on the grass and around the kill spot goes running and pointing... where? Towards precisely that same direction... the direction from which that money shot came, duh. Picket fence. Mystery over. Watch the fielders, not the baseball itself. They will always give you a clearer idea of where the action will be.

For these high-impact historical moments (the ones where I wasn't there) and their aftermaths, I've learned to trust the unfiltered reactions of the people you see in those films -- in the cases where there are films or recordings, anyway -- and NOTHING ELSE. And that is true for any circumstance about which we have been propagandized during the course of our lifetimes. Watch the game, mute the commentators whose careers depend upon their hyper-dramatized opinions being louder in their defense either of the status quo or its perceived alternatives than the next guy's, and draw conclusions based on the most pure observations of the event -- decluttered of the decades of babble pro and con -- available. In this case, you absorb all the angles of the murder and its aftermath. All the footage and photos from Zapruder to the others and back... and you see that's what they show, so despite all the blather that must be what really went on.

I'm not saying I know the intimate details of "what happened" like so many claim to... all I know is that John Kennedy is long dead, and it isn't like there wasn't a laundry list as long as your arm of people and organizations (Joint Chiefs, CIA cold warrior freaks, Castro-hating Cuban exiles, Birchers, the Mob, the list goes on forever) that wouldn't have fought to the death over a deli-counter-style numbered ticket stub to be first in line to take a shot at the man. Nor am I saying the smug little Mr. McSmirky, "I'm just a patsy!" Wannabe Intelligence Douche they pinned it on didn't have some significant hand in it, not at all. You just have to forget everything -- as involving as they may be, forget all of those associations and that these intervening fifty years ever happened and watch the game -- and let the absence of that pollution and corruption of the chain of evidence leave the opportunity open to just watch (and listen) to the footage from the many angles from which it was filmed and recorded. And don't even look at the limos anymore, watch the onlookers. I trust them as the honest arbiters of the moment because they were there and we weren't, and in the amplified state of sensitized you get into when there's gunshots and blood and all of a sudden, out of nowhere, you might die. 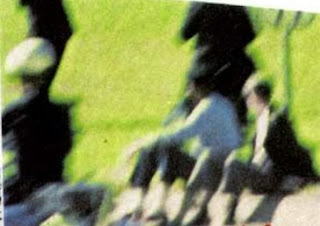 In my experience, in all these things it's really important to retain a distance and an unwillingness to say definitively what happened as if you were there and that's the last word... when you see people doing that it's almost always to make money from a book or a film, or they've some perspective that's being narrowed/distorted by a personal enmity or favor towards some element or personality within the subject matter. We'll likely never know what really happened in this particular case, but if we are to glean any sort of rational, objective idea beyond the speculation that surrounds it, the only way is through consideration of the film and sound footage of the moment and its immediate aftermath, with all other associations, theories and whatnot set aside. And preferably with a focus on the reactions to the event in the moment by the onlookers and not even the event, or what we've come to know as the event, graphic and disturbing as it is. 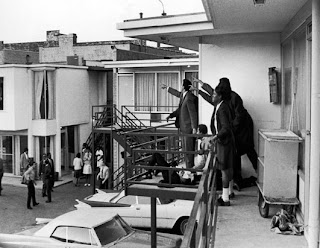 Remember the famous picture of Dr. King's aides in the seconds after he got shot? How they are all pointing across the way to where the shot was later proven to have come from? That's because it's in the moment -- there's gunfire and their friend just got blown to bits and shit just got real. No poses, no time to react in any other way than in what the raw, unfiltered moment demands when there's chaos, danger, mayhem and death happening all around you in three dimensions. Truth. 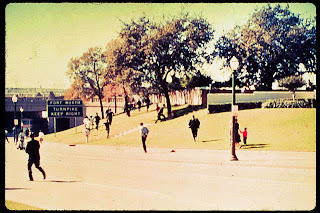 This is why I suggest that we STOP looking at the cars and the motorcade and the big money snuff shot (if it bleeds, it leads) where the man from Massachusetts takes it large in the dome and START looking at the reactions of the people right as it happens and the various civilian cameras (the cell phones of their day) are rolling. What do they do? Where do a big old bunch of them -- in direct contravention of their own safety for all we know, as rifle and possibly semi-automatic weapons fire from somewhere very nearby has just caused their president's head to explode, like a watermelon at the hand of Gallagher, right in front of their astonished eyes -- go running and pointing towards? They sure aren't going running for the book building... not that fire didn't come from there, but that isn't where their gut reactions -- in their heightened state of awareness only visceral danger and peril can evoke -- take them.
A case in my point is this Dallas radio reporter (forget his name but he was all over the TV yesterday) that was the closest to the event... you always hear his frantic little snippet "It appears as if something has happened in the motorcade....". Well on the big anniversaries like yesterday is I guess when they break out the cats (and ladies) behind the snippets, so to say... so they have this guy in the studio now and they play his whole spiel in the moment, as the thing was happening in front of his face, and then he recollects it for the cameras. And while the original sequence rolls, they play the different footages and you hear him get all adamant on the tape (in his ultra-real, genuine crisis moment voice that cannot be faked or obfuscated) that people and cops are running "up the hill" towards the area where the infamous picket fence and the Stemmons Freeway overpass look like they meet... as the pictures and film are showing, well shucks, exactly that.

Whatever the truth about this particular event is, rest assured it's the birth -- the absolute alpha and omega moment -- of what Naomi Klein refers to as The Shock Doctrine. They (mass media of all ideological persuasions) show that big ugly horrifying Zapruder film of Captain Kennedy meeting his (gruesome, uncalled for, not cool) end in the moment all the time and twice on Sunday, not even out of some "conspiracy" or untoward impulse to "conceal" the "truth" but because like I said, if it bleeds it leads, and it's become part of a culture of self-imposed Shock Doctrine bloodlust-gratification in a lot of ways since 50 years ago. The "Faces of Death," reality-TV shockfest meets the national security state at the corner of Stockholm and Syndrome. But only on days like yesterday do they sort of break out the more complete thing and the other, less well-known film and sound sequences from that day, and it's in those lesser-viewed and heard ones that you can get more angles of the instant replay and perhaps start to move towards efficacy -- maybe not in figuring out what happened and who did it (that will never be known, which is sad but it is what it is), but at least in seeing what fence the ball went over, to use my earlier metaphor. 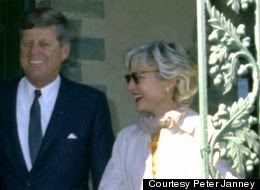 All that said, for any further avenues to travel in seeking to attempt to accurately discern who may have done it and why, I'd right now recommend the recent book "Mary's Mosaic" about JFK's mistress Mary Pinchot Meyer and what the two of them were doing in the years and months leading up to his demise. Very big keys to the real story are contained in that book, IMO. The name Cord Meyer looms large in so much post-WWII skullduggery and this JFK-stars-in-the-world's-first-instant-snuff-film mess of 50 years ago is no exception to that rule of thumb. 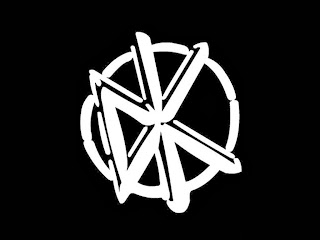 I'm going to try and keep political-type stuff off this page as a rule, but I'll conclude my little rant with the assertion that all of this is part and parcel of what Jello Biafra means when he says to the audience at the very end of this stunning SF Mabuhay Gardens Dead Kennedys set from late 1980: that it's time to "make America stupid again." This performance, from what I can gather from web research, was their very first after another of history's real facepalm headshakers: the 1980 election. I think it marks the first show in which they ever morphed "California Über Alles" into "We've Got a Bigger Problem Now" and changed its subject from Jerry Brown to Ronnie Raygun. 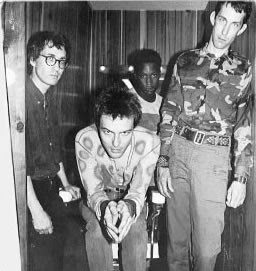 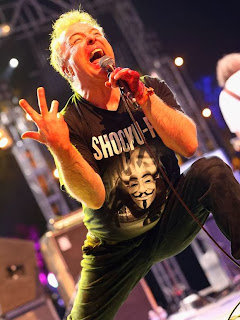 Some people go insufferably on about what a tasteless name Dead Kennedys is. But I don't think a hardcore leftist punk band whose songs are all about the disaffection and grassroots-level horror wrought by the complete collapse of the social construct -- formerly known as "the common good" -- that we've witnessed in the period of time since the events described above should... could, even... be called anything but.

Enjoy the show and thanx for reading... --J.
Posted by Emmpaurer Nowbodhi at 5:25 PM