Someone Fetch a Priest!! It's a Bowie Birthday Bonanza

I dunno folks, this is two posts for 2014, and two 67th birthday celebrations. Keep this up and I might have to restrict it to just that: only people turning 67 will get into these pages. Sorry 66s and 68s, it's just not your year. Or maybe I'll limit it only to artists who are turning 6 or 7; better get the young'uns involved before they grow up to be Justin Bieber. 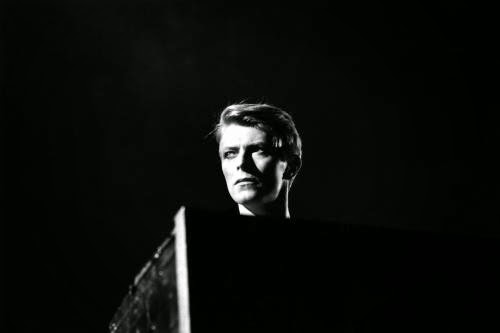 Speaking of Justin Bieber, it's also the anniversary of Elvis Presley's birth today... but he never had Adrian Belew in his band so he gets passed by, I am afraid. Not that I don't love James Burton. He just never played a solo entirely on the strings above the nut of his Telecaster, at least not to my knowledge. Come on, we have standards here... although Elvis sure did a tremendous version of "The Battle Hymn of the Republic" in those 1970s concerts of his. He could get down, once they stuffed him full of Quaaludes and into one of those rhinestone jumper suits. Bieber is at least 40 years from that career path, but he'll get there sooner if he can pursuade Big Pharma to start manufacturing 'Ludes again. 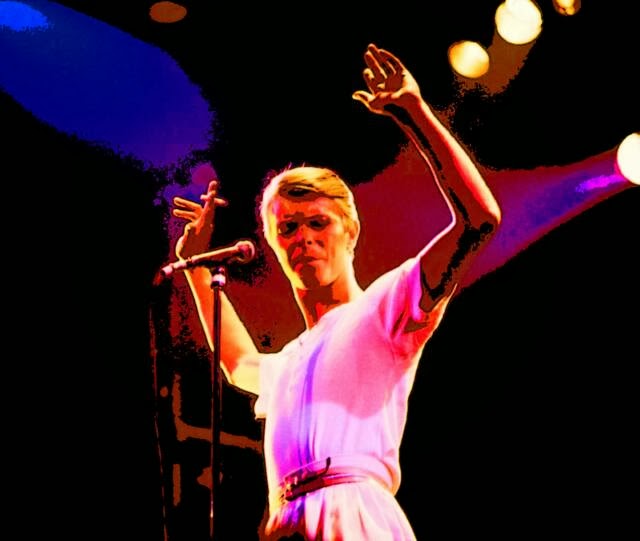 Nope. Elvis is, once again, (worst, most pretentious wordplay ever attempted in human blogging history in 3....2....1....) bereft-yet-lilting. I decree today to be for the man more than a few feel to be the first modern Rock Star. A man of many personae and even more distinct career phases and stages. One of the central figures in putting the "Art" into Art Rock, back when such things mattered, or appeared to through the haze of cocaine and champagne we like to call the nineteen seventies. Another day, another seminal popular music innovator, I always say. 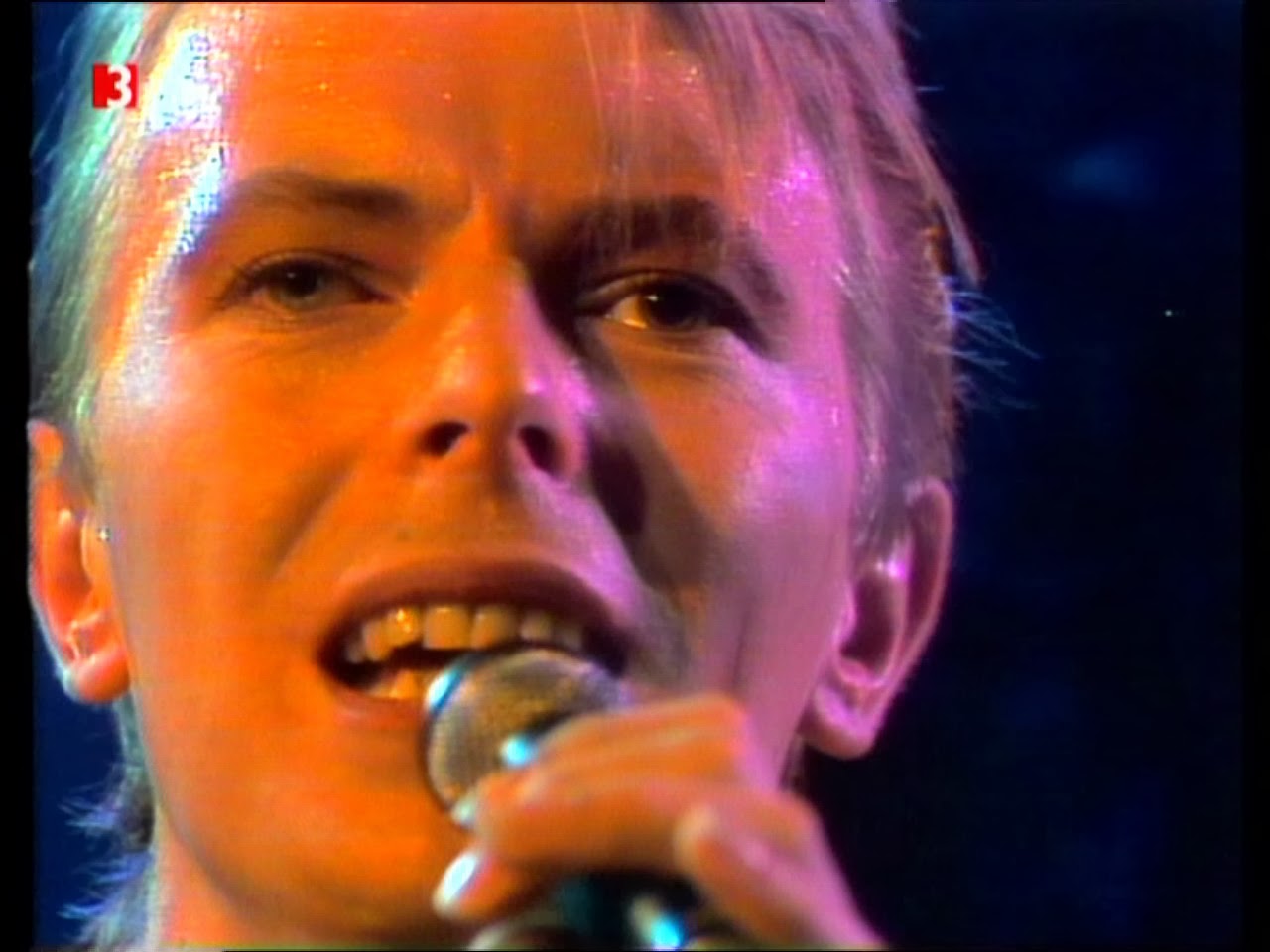 You know David Robert Jones, and you love him, as billions have and do, so there's really not a whole lot I could construct as per some sort of intellectualized, rational opinion about the guy. Writing about music is so stupid anyway... forgive me, but I gotta say something -- tepid and peripheral as it may be -- to go along with sharing this archival stuff on here. I suppose I could just anonymously post things and leave it to y'all to figure out what it is and when it's from, but where's the pathetic ego gratification and fulfillment of the need for unwarranted attention in that, I ask? 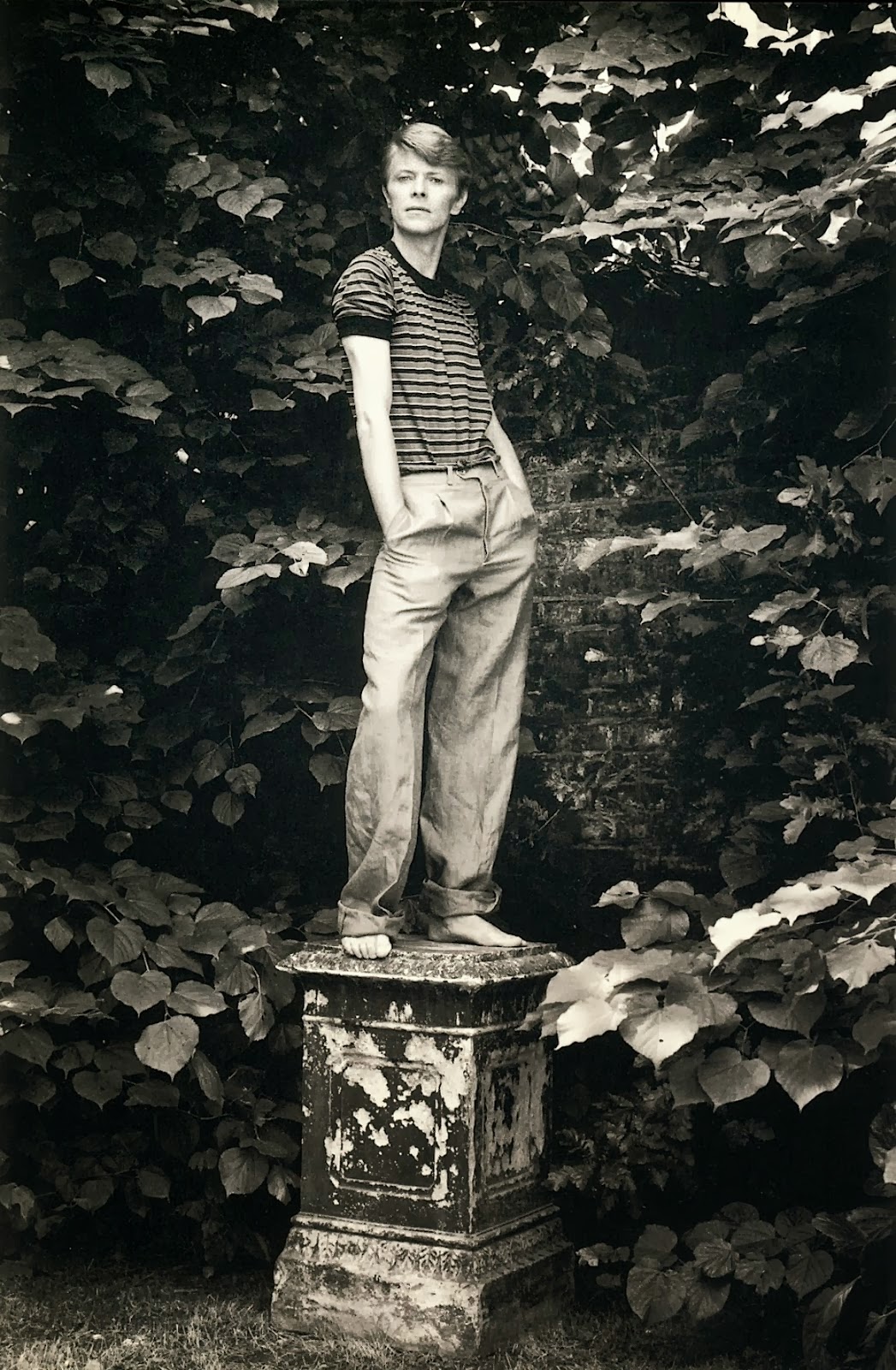 These concerts -- really two short sets totaling a little more than an hour -- tell the story better than I ever could anyway. This is my personal favorite of this guy's different periods: the Berlin Trilogy of Low, "Heroes" and Lodger (and of course, the live record from '78, Stage) are the stuff that really gets me up and boogeying to "Blackout". It always helps when you make records to do it with the guards at The Wall checkpoint pointing automatic weapons at you in the control room from across the courtyard at the studio. Robert Fripp is actually on record saying that he plays way better when under the threat of imminent physical harm and even death... OK, I made that part up; he never said any such thing. But one need only listen to his playing on "Heroes" to comprehend the truth in that statement anyway, even though there's no truth in that statement. And yes, this is the same Fripp last seen in the BBC Bowie doc "Five Years," whispering -- like something out of a hybrid of The Benny Hill Show and The Matrix -- into the camera about how people "get erections" listening to this music. And how the difference between pop and rock is that in rock, "someone might get fucked". Gee, wonder what's on Bobby's mind? These randy baby boom geezers never quit, do they? Take off your blouse, I think he wants to show you ladies his Crimson King. Or maybe even his Lizard. 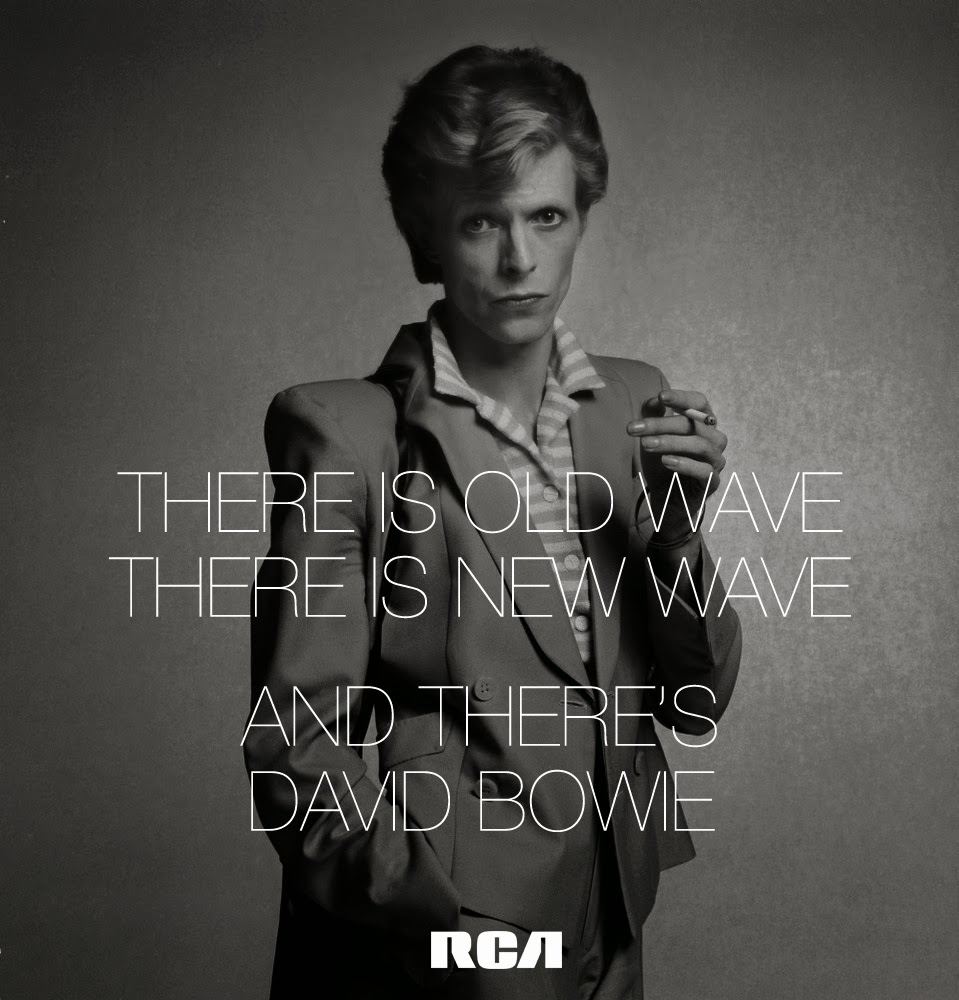 True story: Bowie met his first wife Angela (subject of the Stones' song "Angie"... and you thought it was Angie Dickenson!) at a press event for the initial Crimson lineup in London in 1969. But back to the 1978 D. Bowie tour depicted in these very nice video recordings. While we're fresh from the topic of sweaty backseat sex in the rear of the van, the rhythm section here is a real thumper along those lines... Dennis Davis gets dramatic on drums, and takes syncopated risks that make you wonder if he's doing it just to see how bombastic his fills can get, but he sure moves things along. George Murray coaxes some shoe-shaking tones from his bass guitar as well. Roger Powell, erstwhile Utopia keyboardist, is on hand with an arsenal of jealousy-inducing analog synth gear. Of course Carlos Alomar is present... he's been with The Main Man for what? Decades now. I especially like his snazzy purple outfit in the Bremen performance. And then there's Belew. Oh, boy, Belew. He fiendishly molests his axe with a childlike abandon... but when does he ever not? You don't get the job with heavyweights like Zappa and Talking Heads and King Crimson and Mr. Birthday Bowie here by holding anything back. All this, and you even get the star of the show, center stage, playing... is that a Mellotron??!? Oh, it's a Chamberlain, my bad. I usually know my antique '70s keyboard instruments better than that. I must be slippin'. 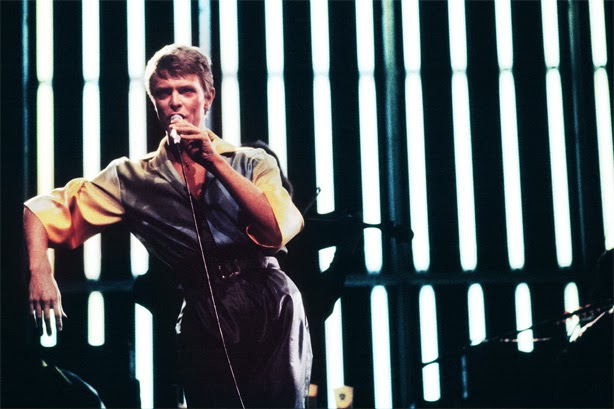 total of 3.66 GB
due to the odd size of the Musikladen segment for WeTransfer, both DVDs are ZIPPED together
first part is here
second part is here 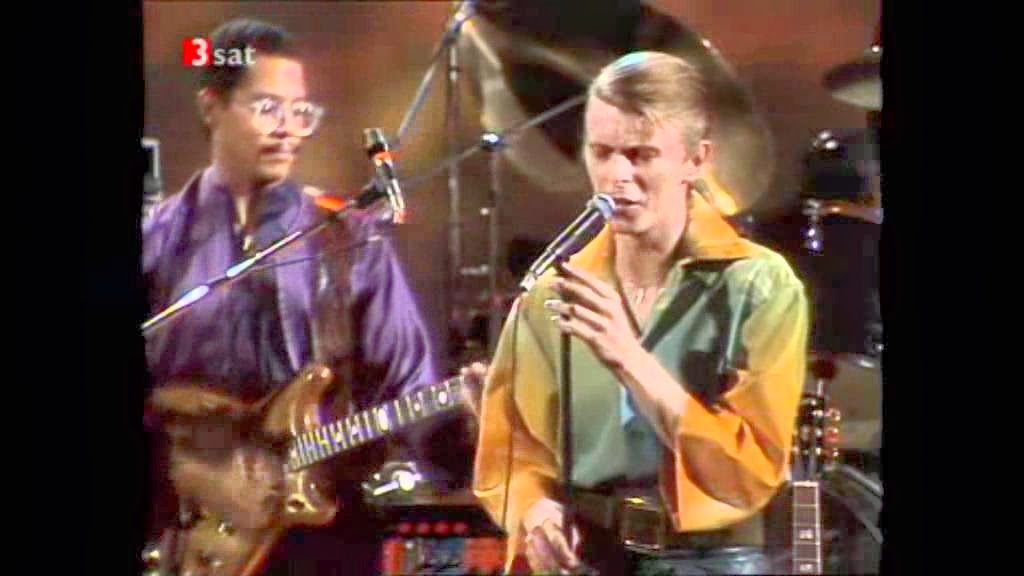 If I were you, I wouldn't hesitate to get these shows, unreleased as they are and in about the best possible quality that is known to circulate. Come on now, friends... smile, at least! It's David Bowie's 67th birthday and what enduring and pioneering artistic figure of our lifetimes would you rather it be about? And don't say Elvis, either! Even though his truth is -- in its own way -- marching on. 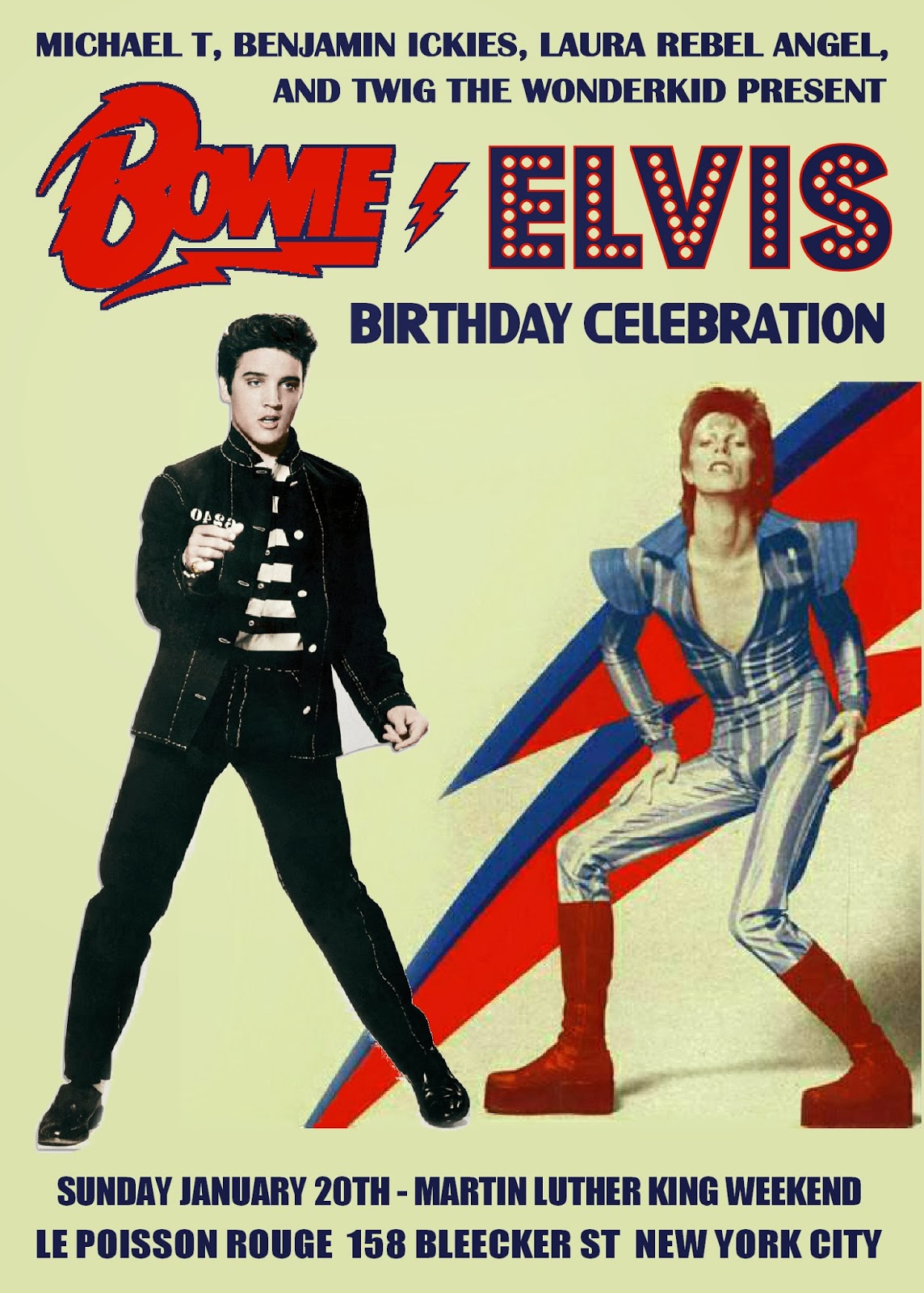 That's all right... any old way you do. Elvis Aaron Presley might be the King, but Mr. Jones here is The Thin White Duke and that has to count for something, amirite? So please allow him to throw some darts into a few lovers' eyes with this pair of vintage late-1970s excursions, dredged from the endless archive of unissued oblivion and provided for your perusal. --J.
Posted by Emmpaurer Nowbodhi at 10:33 AM 2 comments: