The Clash Flies Down On Broadway

We resume the story of The Only Band that Mattered 33 years ago today, when our heroes were ensconced on Times Square in New York City in the midst of a nearly-month-long residence at the old Bonds International Casino dancehall. They had to play the whole month because the greedy promoters oversold the initial run of a week's worth of shows so ridiculously there were riots in the streets. And not the kind of disturbance caused by the jockeying of teenage girls to get within undergarment-tossing range of the band, either. 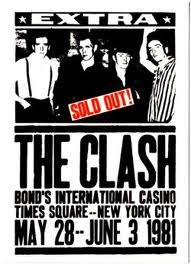 Hence the title of this bootleg right here: Chaos In New York. You hear Joe refer to it during the set, about here we are for another fucking night at Bonds. This June 4th set was recorded from the mixing desk but also may exist as a WNEW-FM broadcast... or the radio set might be the June 10th set, no one is really entirely certain. It doesn't matter, it's the fucking Clash dead center at the peak of their not-insignificant powers, before the drummer's smack addiction flushed them down the toilet and the thing began to splinter apart just as it was poised to take over the world.

It's almost impossible, if you weren't there, to conceive that music was once like this... that people viewed the rock musicians as the avatars of the culture to the extent that a band playing a club and selling too many tickets to too few performances could cause riots and the cops to be called out to restore order, but that's how it happened. When you listen to what our lads are up to on the stage, it's not all that difficult to comprehend why. 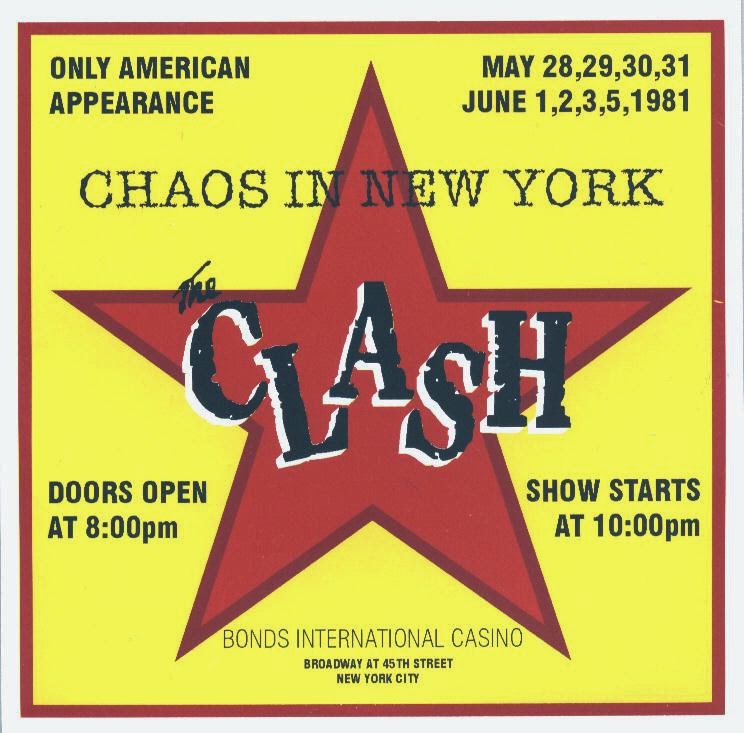 The artwork for the boot CD from which this is derived seems mistaken, in that Charlie Don't Surf is the first track on the second disc and not the closing track of CD1. I left it as is, but don't let that deter you from accessing and enjoying this trip in the time machine back to a very different 42nd Street than that which exists today. Maybe someday we will live to see another era where human expression in art and music will command as much passionate attention as these guys did in theirs. Or maybe that was the point of the corporate takeover of it all that was nearing its completion at around this time in 1981... that such a degree of attention and substance would never be seen in popular culture again. Complete control, indeed. --J. 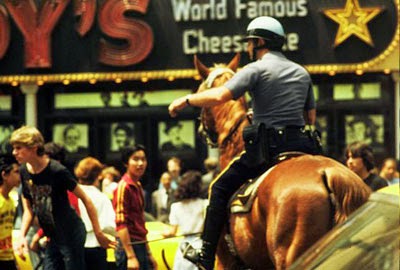