I am back again, starting the last week of my Roaring Forties with a necessary tribute to an ultra-mega-legend turning a prodigious 90 today. 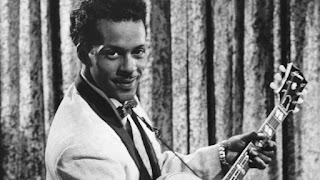 He is considered by many to be the singlemost significant figure in the creation and codification in culture of both the musical and personal-style content -- the "stance" -- of the music we call Rock and Roll. 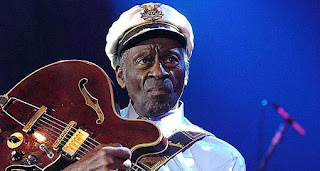 He began in the 1950s -- when he was first to score multiple smash hits with his brand of riff-laden, harder-driving R&B that was just beginning to be called Rock -- and continues to this day, when (astonishingly) he is in the midst of recording his first studio record in 37 years. 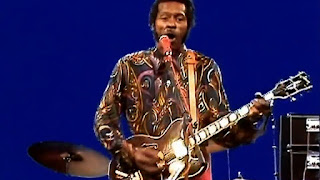 In the beginning, it was he who most inspired the artists who formed the initial British Invasion of the early 1960s. Keith Richards essentially grafted his entire guitar style, wholesale, onto the Rolling Stones' initial forays, and The Beatles covered several of his songs. 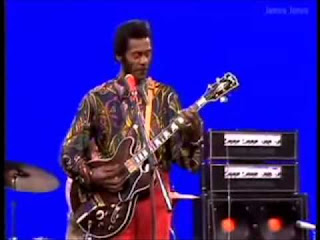 And his influence is not limited just to Brits, either. Ted Nugent -- not the usual guy for me to quote, but appropriate here -- is on record saying that if you don't know the vast catalog of riffs invented by today's birthday boy backwards and forwards, you can't play Rock guitar and should quit immediately. 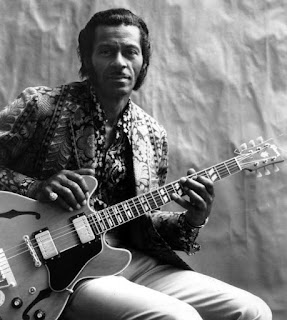 At its inception, when Rock music and attitude were just beginning to form like the early stars and galaxies of the primordial firmament, Chuck Berry -- born this day in 1926 and still, somehow, rocking -- galvanized it into a unique expressive art form with its own legs and duck-walking, guitar-flipping pyrotechnical style.

The Beach Boys borrowed his melodies for several of their biggest hits, most notably Surfin' USA. Guitar players the world over sat up and took notice, and still do, as he is one of the most emulated players ever to pick it up... when Jimi Hendrix played behind his back, he was imitating several luminaries, but chief among them was Chuck. What he started -- maybe not so much started, but honed into the first viable version of itself, from which all else followed -- echoes through the DNA of the music of our lifetimes like perhaps no other person you could name. 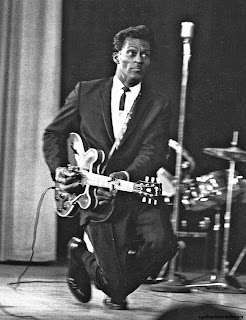 Ninety is quite an achievement, especially for someone who has toured and lived the life of a traveling troubadour for longer than my old ass has been alive. That he is finishing a new album -- his first original set since 1979! -- ought to give the lie to how active and awesome we all think we are at our respective vintages. Suddenly, getting three chapters proofed for my work doesn't seem like such a mountain to climb. 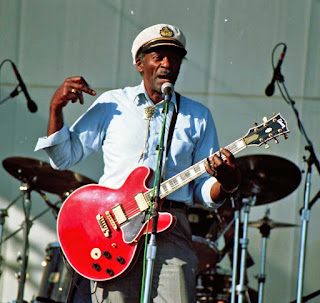 To commemorate the occasion of his milestone 90th, I have thrust into the cloud a pretty wild performance from the mid-1960s, when he went to Europe and began to really tour extensively there. This was taped for Belgian television in February of 1965 and features the man in league with some crack Jazz players keen to rock out and competent enough as sidemen to keep up. It's a PAL DVD and seems sourced right from the original master tapes, and was prepared by noted archival audio/video boffin JTT, who always does it impeccably right. 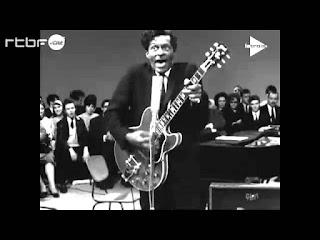 PAL DVD, likely from the BRT-TV master tape or a rebroadcast (hence the logo), prepared by JTT
1.38 GB here 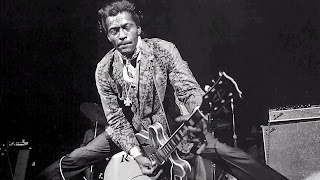 This is a half hour of highly representative Rock from one of its true Samurai warrior-masters, complete with all the tricks and flair and captured at the peak of his innovative powers. It isn't often I get to celebrate someone who is still among us who is turning 90, so pull it down and see what all the fuss, 60 years after he hit the scene, is all about. And the happiest of birthdays to Chuck Berry... sweet little sixteen, times five, plus ten today!--J. 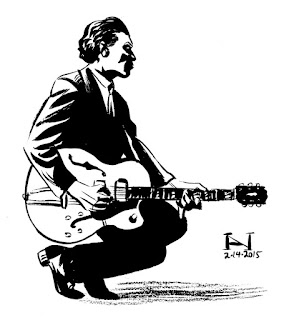