Welcome to my latest Saturday evening post, which this time is in tribute to the most prolific and revered composer of film music who will likely ever live.

The idea that he is 90 today is one thing -- the fact that I rarely get to write one of these things about someone of such a vintage who doesn't get the finalizing dates at the bottom is another, and we should be grateful this guy is somehow still around and doing what he does.

Even if you have never heard his name and have no idea who he is -- which is possible but unlikely -- you've been hearing his music your entire life, as a pivotal element of countless movies you've seen and watched over your lifetime.

I have posted on him before, but 90 is such a huge milestone in terms of longevity I could not resist doing so again. His music has been such a huge part of my life I couldn't not.

It is estimated that he has scored between 700 and 1000 films. The exact number may never be known, not even by him.

Many of them have won the most prestigious awards -- he's the oldest man ever to win a competitive Oscar -- and are part of the firmament of essential and classic cinema.

This, in no small way, due to the presence in them of the music of Il Maestro Ennio Morricone -- born this day in 1928 --  himself possibly the most in-demand soundtrack maker ever to pick up a baton.

Every once in a while, he'll have a little tour or one-off recital where he will pick up said baton and conduct a performance of his music from the zillion films in which it's been.

That he's still doing this into his 90s just makes your jaw bounce off the floor, but he occasionally still does.

Today's such concert finds our hero conducting a fairly recent two-hour performance of some of his greatest works, complete with a choir, a full orchestra, and a little rock band.

It was broadcast over RAI radio in Italy as it happened and was digitally captured here in its complete, unedited form.

There is even a 10-minute onstage interview segment -- in Italian -- with the birthday boy to close out part one... almost like when the sideline reporter catches the coach on his way to the locker room after the first half of the game ends. 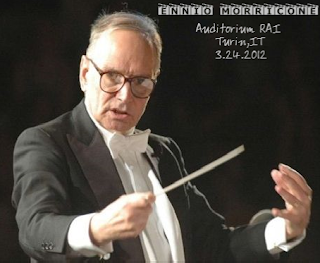 I am back tomorrow with another b'day thing for another (somewhat younger) luminary.

But the good, bad & ugly of things today is that you will please enjoy this beautiful concert, helmed by this illustrious and decorated elder Maestro and given here in gratitude for his life and in celebration of a big birthday most of us mortals will never see.--J.