There isn't a whole helluva lot to say, is there? What do you say about perhaps the singlemost influential musician of our lifetimes? I could go on about virtuosity and innovation and so forth. I could describe, in minute detail, why it's easy and absolutely factual to say that there was music before him, and music after him, and that those are two entirely different things that may as well have existed on entirely separate planets. 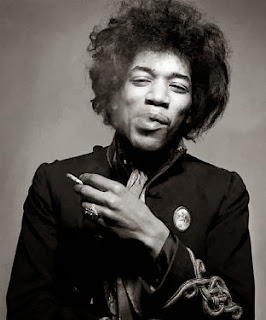 It doesn't much matter what I say, because most if not all of it has been said many times over, by writers far more expressive than I, for decades now. If I were to add anything, it might be that I'm a Hendrix heretic of sorts, preferring as I do his Band of Gypsys era stuff with Buddy Miles and Billy Cox, to the more widely acknowledged (and deservedly revered) J.H. Experience with Mitch Mitchell and Noel Redding. But that's just me, so who cares? Saying you prefer B.O.G. Hendrix to the Experience is like me saying I prefer Picasso to Magritte anyway... when both are undeniably indispensable contributions to the continuum of human expression. 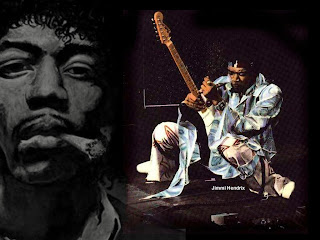 So instead, let's tone down the rhetoric and turn up the music, because whatever you prefer you know beyond doubt that this man produced sounds so sublime that his influence will go on as long as there are human beings alive on this Earth. There's no one else I can really think of (maybe Nick Drake?) who managed to cram 27 lifetimes into a mere four years of recording. And poor Nick, not a soul knew who he was until many years after he died... like Jimi, obscenely young. Hendrix didn't suffer from obscurity once he broke in mid-1967 upon his return from the UK to America for the Monterey Pop Festival... much the opposite, he was hounded by assholes, profiteers, and downright evil management to an early grave, but died being considered, by and large, the best guitar player in the world. Many feel he is still on top and no one will ever surpass him. Who am I to disagree? 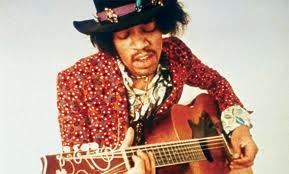 Better that I save the redundant hyperbole and sit here all day and night making this compilation of a bunch of my personal favorites, which I assembled from all kinds of places, spanning official releases (of tracks that were never put on albums while JH was alive) and as-yet-unissued Hendrix studio performances and jams. I was meticulous with the bootleg-type material to scavenge my archives for the best possible sounding sources... so there isn't much of a noticeable dropoff. Honestly, the idea that several of these cuts remain unreleased just makes you scratch your head, given that some of them (the sitar version of Cherokee Mist, the 23+ minute excursion down the Highway of Desire, the take of Calling All Devil's Children with the phony, hilarious "drug bust" at the end, etc.) stand among his finest and most intense. Especially as per the Shit-Hot Guitar quotient that was the bedrock of his fame. 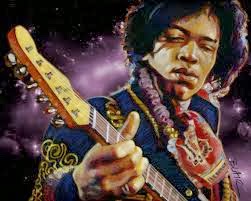 My advice is just to grab the music with both ears and dig it like the man himself always claimed was all he wanted you to do. I tried to make it all sound like one thing, despite being cobbled together from so many different locations, so forgive me if it all sounds a little disjointed and all over the place. Someday there will be a 700-disc box set that contains every note the guy ever played on every Stratocaster he ever strangled, all mastered impeccably with the care, concern and attention the material and its ongoing impact merit, but until then this may be the best we can do. Regardless, it's all essential music that will never even go to sleep, much less pass away. 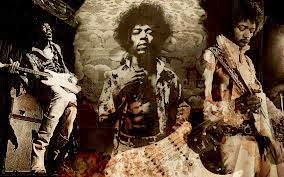 Jimi Hendrix
Calling All Devil's Children
in the studio, 1968-70 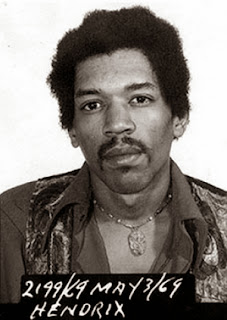 As tragic as it was that Jimi Hendrix -- in many ways unjustly a prisoner of his own notoriety while he lived -- left this plane so soon, we still have the music and he gave us a whole lot of it for someone who did not live to see 28. Every song, from the loosest and most exploratorily sloppy jam session to the most overdubbed and slavered-over master take, comes with a sincerity and passionate, overflowing sense of abandon and vibrational immersion... a quality sadly and glaringly lacking in too much of today's music, the people that make it, and the faceless and dispassionate corporations that mass-produce it. It wasn't always this way. You are welcome to grab these discs I just threw together and see, hear and feel how it once was... oh yeah, and Happy 71st Birthday, James Marshall Hendrix!  --J. 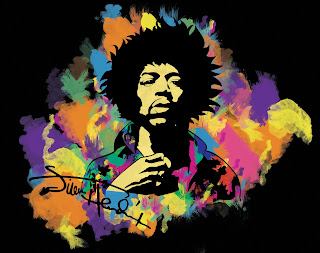