In the Hot Sun of a Christmas Day: Greetings from The Gospel-Loving Atheist 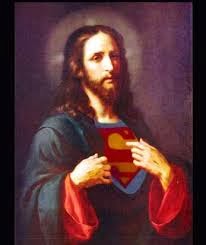 Hello again and the happiest, merriest and grooviest Yuletidings to each and everyone! I emerge after 4 days and nights beneath the trusty headphones to bring you my gift to any that would receive it: a sort of instant box set, via my own custom-curate and completely crazed imagination, of Christ music. Not Christmas music -- because, let's face it, a lot of folks don't really like it and it tends to have an expiration date of somewhere in the vicinity of December 26th -- but Christ music. Kind of the crossroads where the anciently authentic and the universally unexpected sides of Gospel meet... all brought to you by me, perhaps the most Gospel-loving atheist this side of the River Unsuredan. If Richard Dawkins was a Celtic Caroler... if Christopher Hitchens was a record-counter cratedigger... if Noam Chomsky was a loaded loungy linguist in need of a lozenge in the Christmas chillzone... well you get the idea. I sure hope you do, because I can only manage so much trite and forced alliterative pretension up almost 21 hours on 5 hours sleep. 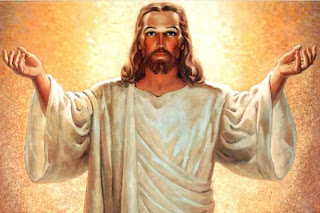 Yes, you read all that right, and anyone who knows me knows I think about as highly of Organized Religion of any kind as I do of that fun-loving atheist a-hole herself, Ayn Rand. Most sermons of any sort, for me, just cause my internal Atlas to shrug and my inner cartographer to cartwheel into confusion and (re)crimination quite quickly. I am much more Bob Dylan than Bob Jones, and firmly believe absolutely in little except that one becomes one's own worst enemy in the instant that they preach. Unless they are on really good psychedelic drugs... I'm always up for a lysergic sermon, even without the actual LSD! Actually the last time I took acid was on Christmas Day, 1991. I walked around the snowy, shoptastic sidewalks of New York City and honestly, even though the stores were closed I felt like I was the only one NOT tripping. 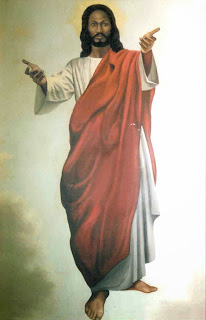 Faith aside, there's a truth beyond belief that can't be denied. Which is that today's most famous Birthday Boy is surely, certainly, absolutely one of the Top 5 social philosophers (in terms of lasting impact, probably Numero Uno) in the history of this species to which we all belong, no matter what our cosmological countenance might be. When I say I love Jesus Christ the Nazarene, a lot of my believer friends often seem puzzled, as if non-subscription to what I'd term the Sky Daddy Deity Mythos somehow excludes acknowledgement of the Divine Discourse laid down a couple of millennia back by The Big J in his Ethos of Eternal Empathic Ecstasy. One need only examine even the most mistranslated and ill-motivated Scripture and when you highlight just the words attributed to JC, you know you're into some of the most right-on rap anyone's ever rocked in any region... and the Dude didn't even need two turntables and a microphone to abide and guide. 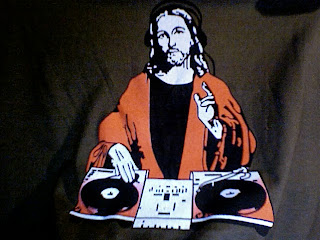 I guess I am of the Gandhi gander, in that I LOVE me some Jesus... it's just that some of his followers -- a minority of Christians, certainly, but a real vocal and venal one -- kinda need Him to come back again, if only to let them know that they need to keep His name outta their mouths. But as my good friend Mr. Nic Caciappo (Volume One of today's triptych of tunes is inspired by and dedicated to him) likes to say, that isn't His fault and you could no more blame The Guy than you could blame the abovementioned Mr. Zimmerman (at one time a self-identified Born Again Christian, even!) for Justin Bieber (at one time a pimply Canadian teenager with a YouTube account and way too much free time). Just cuz you're the Alpha and the Omega of something doesn't mean you're responsible for every yahoo that ever subsequently tried on the jacket. We know it: there's a LOT of insistence in our Mammon-motivated world that we touch the hem of the varmint, and that ain't right.... especially for a socialist queer like yours truly that some believers would like to use for target practice twice on Sunday. 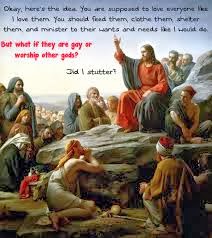 I admit I am not much for Christianity as it often tends to come across, but that's just me... and a few million other atheists I guess. But Christ is a whole other story, and His is one Sermon that IMO ought to be Mounted on every wall... in the hopes that maybe someday people will finally get their heads out of paper money's phony, fiat ass and start to comprehend in meaningful and actionable terms for today's world what He was on about in His, and on about it in such a revolutionary way that the authorities took him down (but not out... sorry, Augustus Caesar you toga-toting toady!) as an Enemy of the State. If the state (upper and/or lower case) is one of Imperial dehumanization and hatred and mistrust like Ancient Rome was, well... all I can say is we could use a few more like Him here in today's Empire, gate-crashing the moneychangers' perpetual piggy-party palace to tell 'em all what a great job they're not doing. What makes Jesus so awesome for me isn't the fear-motivated punishment paradigm that has sprung up after he split, but the eloquence and simplicity with which He stated the case for the observable and basic facts of life, which are pretty simple and direct until we start going along with the Way of the Rival ($atan be hatin') to get along with what we think is survival. For me, treating others as I'd wish to be treated and understanding that what is done to the most vulnerable of us is thereby done to the as-yet-unknowable force that unifies us all, whether we care to recognize that connection or not... that's just good, common sense if you ask me. You could call it God, but that's just too hierarchical and top-down for some folks. For me, to attempt loving without precondition and forgiving and accepting the Humanity of people because of some fear of what, if I don't do it, is gonna happen to me after I stop breathing is wanting the right things for the wrong reasons. I just think the Traffic jam in all of our heads would clear up at the Intellect Interchange if we could just see that Heaven is in our minds. And maybe then we'd find the exit ramp off Dystopia Drive and get onto the Healing Highway the Man from Nazareth wanted so badly for us to travel the long road along to where we belong that he willingly died in a really torturous manner, as a down payment investment on the possibility of that eventual outcome. It Is Finished... but it's only just begun. 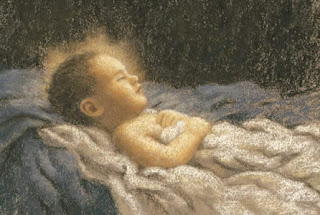 Listen to me, I am such a whiny li'l baby... the most preachiest and pedantic non-preacher in the proscenium, aren't I? I'll close by saying that the truth is I would be fine with religion if it would just adhere to one simple and elemental rule: no talking, only singing/musicking. If it's the Celestial you seek, I'd say music -- the Language of Vibration -- is a good place to start by moving the air with more than just the usual caustic heat. I guess this is why I am such an enthusiast of Gospel music and Gregorian Chant (I admit it, I really love Latin when it's sung) and stuff like that, even though I don't believe at all in an anthropomorphized God per se. Here's the Music of the Spheres that calms the fears and steers us clear of mere jeers, dears. I bet if Jesus were alive today and here in the flesh again, he'd make Jimi Hendrix look like Jimmy Hoffa on guitar, you know? Or something like that. You're damn right He had what the great Leonardo de Cohen calls the Blues for the Jews, that's for sure. 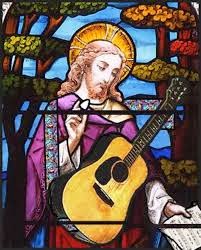 All right, enough crazy Christmas crapranting... like I said I dig the scene of the clean Nazarene so serene I made him an audio magazine -- a trinity of them, in fact, each with its own theme -- for His 2013th birthday today. He's not around right now -- except in the hearts and minds of the countless zillions of people (me included) whom he continues to inspire like perhaps no other human ever to walk the Earth -- so in lieu of His return I offer you this solstice Christmas Canticle to enrich this day and all days that lay ahead, whether they are in December or July or in months we don't even have names for yet. This is Christmas music that isn't just about Christmas, but I hope it captures and celebrates some essential qualities of what makes Jesus Christ -- truly a Man for all Seasons, no matter the reasons -- such the superlative Superstar. So thus bedecked with a gay garland, let us servire cantico! 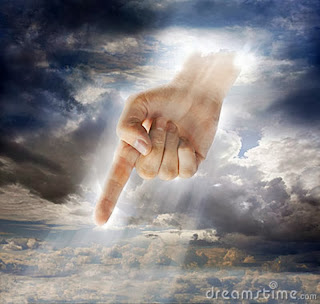 "The Holy Trinity"
(dedicated to Jesus Christ... who only lived to be 33 1/3, but whose records will never be broken)

01 Larry Jon Wilson - Canoochee Revisited (Jesus Man)
02 The Meditation Singers - I Love My Jesus
03 Staple Singers - The Savior Is Born
04 Rance Allen - The Jesus Thing
05 Preacher & the Saints - Jesus Rhapsody
06 Rotary Connection - Christmas Child
07 Last Call of Shiloh - Message of the Gospel
08 Sons of Truth - With Jesus You're Free
09 James Austin - I'll Take Jesus for Mine
10 Gospel Comforters - Jesus Will Help Me
11 Edwin Hawkins - Jesus, Lover of My Soul
12 The Doves - The Lord Is My Shepherd
13 The Southerners - Jesus Is Real to Me
14 Larry Norman -  Why Don't You Look Into Jesus
15 James Brown - Santa Claus Go Straight to the Ghetto
16 Al Green - Jesus Is Waiting
17 Ray Charles - Heaven Help Us All
18 Cannonball Adderley - The Black Messiah 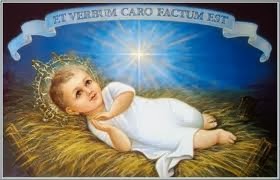