OK, it's Sunday and time for the second of our two weekend posts, which almost couldn't be any more different than yesterday's.

While yesterday was concerned with a legendary musician, today we have one of the more legendary concert tours ever undertaken, from a group so revered that there are no less than four tribute bands packing venues all over the world doing nothing but rehashing their old stage shows, gesture for gesture and lighting cue for lighting cue.

This one dates from back in the distant days when bands would cut epic, double-LP concept records and then bludgeon unsuspecting audiences with the whole opus at once. This tour is so mythical, music fans worldwide have been pleading for this lineup of this group to reunite for decades, just to play the whole damn thing live again. 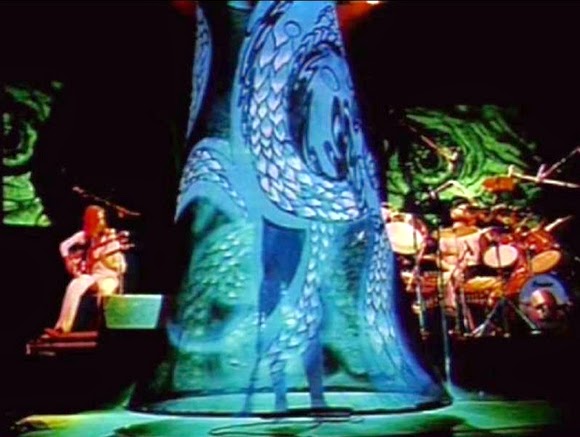 That's unlikely to happen, but thankfully it was minimally documented when it was going on. Lucky for us, the drummer -- eventually to be one of the most famous and top-selling musicians on Earth -- had the sound guy record a whole bunch of it onto a cassette deck by the mixer, night after night across a mere 102 global dates. 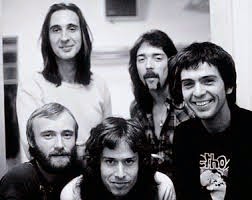 When Genesis embarked on the tour for The Lamb Lies Down On Broadway in November of 1974, they were a band just beginning to make commercial inroads beyond their core Progressive Rock audience and into the mainstream of touring rock acts. Roughly two weeks into the tour, they were a band in crisis, with theatrical madman lead singer (and eventual global superstar) Peter Gabriel having announced to them in Cleveland that when the shows ended, he'd be quitting for good. In his words, this was "a bit like telling someone you had decided to kill their child." 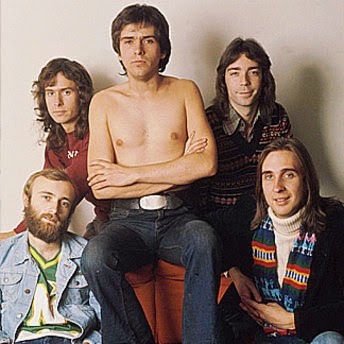 The expressions of Tony Banks and Steve Hackett in the above picture kind of say it all, if you read between the forced smiles. Obviously they couldn't have known that the attritions of Gabriel and later Steve himself would only serve to catapult the streamlined and commercialized Genesis into status as one of the top-selling and most popular groups in music history, whilst providing healthy solo success to most of its members, past and present. 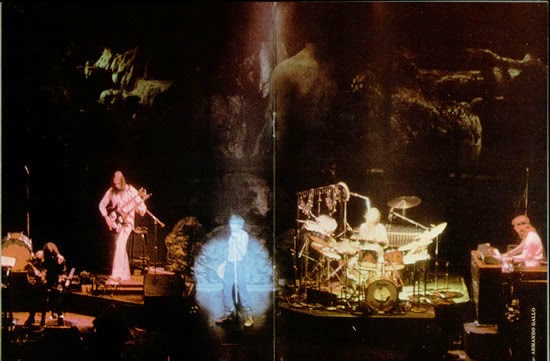 But back to the tour, yeah. The biggest source of conflict in this band, at the time of these concerts, was that the theatrical costumes of Peter Gabriel were completely overwhelming the music onstage, to the chagrin of the other four guys. This tour, being PG's swan song, did not disappoint in the visual department, which is I suppose one reason so many people who missed it 40 years ago are so hyped to see what it was all about now. 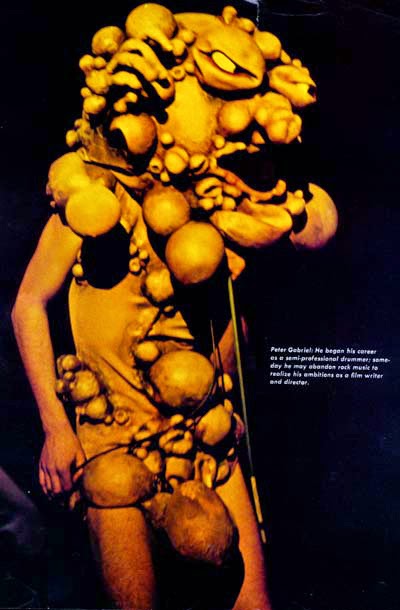 So to that end, we have here what's sometimes considered the definitive recording of a Lamb performance. This was taped exactly 40 years ago this evening in Florida, about two months into the American leg of the tour, and features seamless patches (even I can't tell where they are) from a couple of other shows where the Lakeland tape had run out. I even took the liberty of subbing the introductory story for The Musical Box (the encore) back in from another show, just so's it'd be a complete representation of just what this brand of English prog mayhem was all about at its apex. 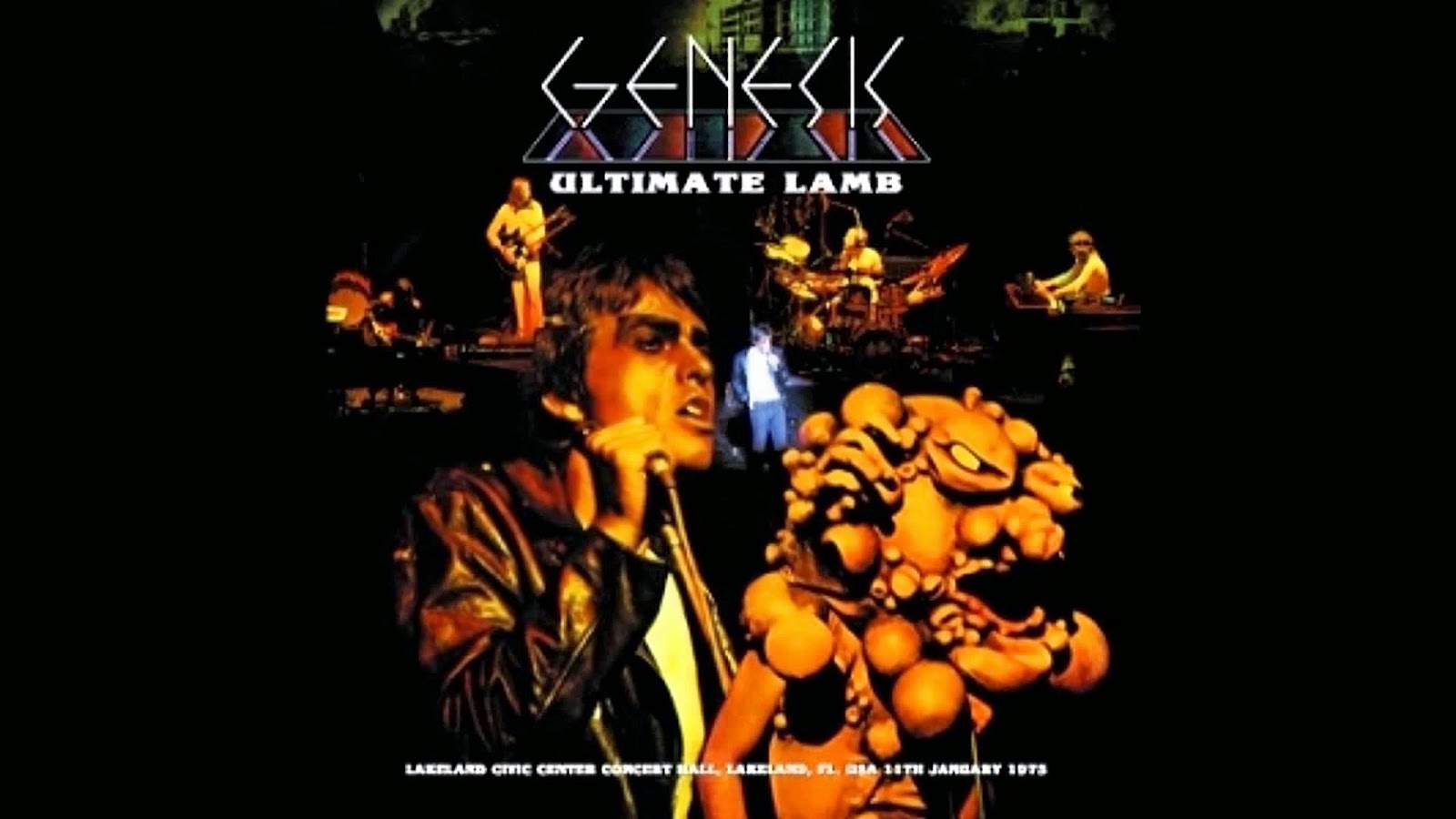 Definitive Edition by the Progressive Rock Remaster Project, with TMB intro subbed in by me
683 MB FLAC here 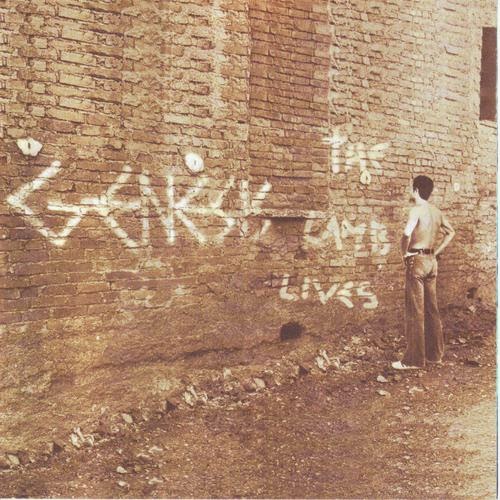 This is a stomping gig, with the G men successfully providing the properly grandiose, symphonically proggy backdrop for Gabriel's high energy antics without once giving into their impulse -- by the time of this show, I'm sure fever-pitched -- to just rend the guy limb from limb right there in front of the crowd. Do enjoy this time travel trip back forty years ago, to a time when you could go see your favorite band and not recognize one single song they played until the encore... and a blessed 40th anniversary to The Lamb Lies Down On Broadway, of course. I'd say that despite what they might have felt back then, things ended up working out fairly well for these five guys.--J.